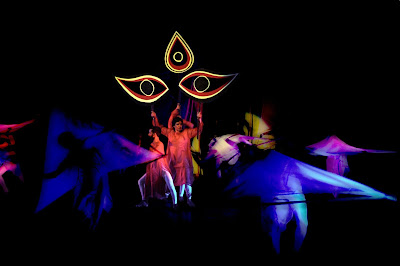 The idea of the Vikram Sarabhai Festival was born a few years after his tragic and early death in 1971. He was the co-founder of Darpana with Mrinalini Sarabhai, and its main supporter. He was a great lover of the arts, and a connoisseur. It was felt that the best way to remember and pay homage to him would be to have a yearly multi- arts festival in his home town, Ahmedabad.

From a modest beginning in 1974 in the Tagore Hall, till 1994, the festival highlighted major national and international artists like Prabha Atre, Bhimsen Joshi, The Battery Dance Company, Gruppa from Sweden, Pratap Sharma and Aleque Padamsee and Darpana’s own new productions.

With the birth of Darpana’s own unique theatre, Natarani in 1994, the festival shifted gear and became the Vikram Sarabhai International Arts Festival, with a thrust towards highlighting and producing major new collaborative work. These have included collaboration between countries, between artists of different styles and between performing artists, painters, sculptors and installation artists.

The theme chosen for this year’s festival is displacement. Today millions of people across the world are on the move. Some move for asylum; some for economic prosperity; some are fleeing war; others are fleeing desertification due to global warming; still others are fleeing economic or religious sanctions. Many, even when physically in the same spot, are psychologically fleeing realities in escapes into alcoholism, drugs, depression and other forms of mental illnesses.

1.     Mallika Sarabhai and Director Gowri Ramnarayan look at escape and flight in literature and mythology from across the world to create a multi dimensional performance to understand the phenomenon over time.
2.     Naomi Deira, British choreographer works with Darpana dancers to create a contemporary dance piece looking at alienation and asylum, with a specially created soundscape and music score
3.     Revanta Sarabhai creates a new piece of musical theater to look at urban migration and the emptying of rural areas.
The festival will create these new works with a hope that they will have wide appeal across India and the world as the phenomenon is a worldwide one. We hope to tour all three productions after they have been premiered at the yearend festival scheduled on December 28, 29 and 30, 2013 at Darpana, Ahmedabad.